About a week ago, we noticed an intruder in our front yard — a vivid yellow, blob-like substance that appeared to be invisibly oozing across our garden mulch like the beginnings of a horror film. My first thought was, naturally, will it creep into the house through the windows, consume my family and then feed on our brains?

But upon further research, I discovered the culprit — slime mold. I had 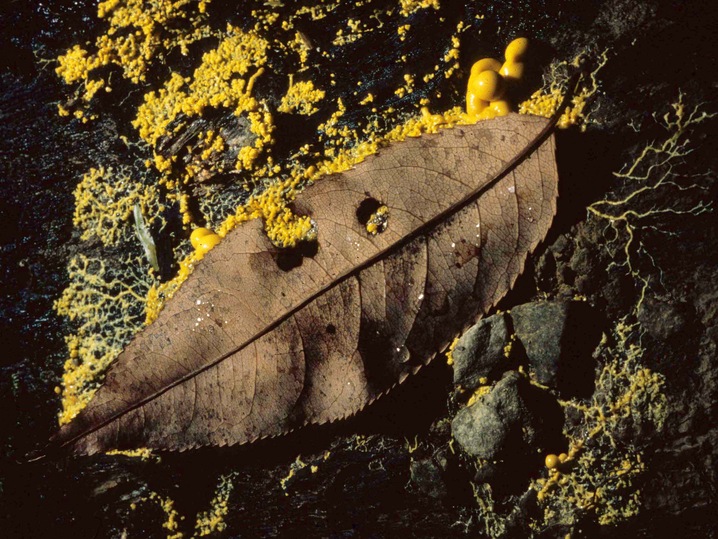 slime mold in my garden. And not just any kind of slime mold. The kind affectionately known as “dog vomit.”

Slime mold is harmless to humans and removing it is as easy as packing it in a plastic bag and tossing it. Be careful not to spread it, and don’t spray it with water as its spores may spread. Photo by Jenny Marder

The nickname took on new meaning when I found that the bright yellow bumps had transformed overnight into a lumpy brown pile that looked precisely like our beagle-boxer mix had gotten sick in the yard.

Like any homeowner, I was thoroughly grossed out and wanted it gone. But like any decent journalist, I needed some pictures first. Plus, I had no idea what to do with the stuff. Was it dangerous? Was it harmful to touch? To breathe? So I took a trek to my local garden shop for guidance.

Yes, they’d heard of slime mold. In fact, nearly every employee I talked to at the Merrifield Garden Center in Northern Virginia had encountered slime mold in their own yards at some point. And to my relief, their brains seemed very much intact.

David Yost, a horticulturist at Merrifield, said in the past two rainy weeks, he’s been getting about half a dozen complaints a day.

“When it’s warm, when it’s moist, when things don’t dry out — these molds, they just thrive in these conditions,” he said. 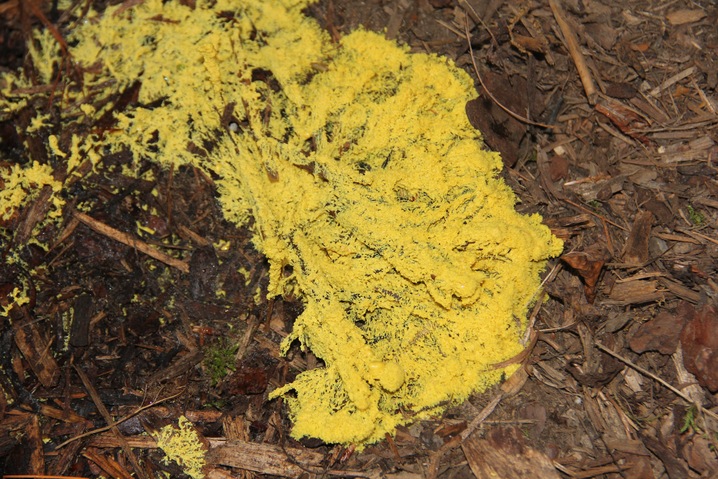 People are always alarmed, and they rarely identify it correctly, he told me. One customer, he said, was convinced that her neighbor’s cat was climbing the fence and vomiting in her yard, until she brought in a sample of the stuff.

Its origins are often in the trees that make up the mulch, said Tim Guy, also a horticulturist and manager there. The trees pick up bacteria as they get dragged through the woods. Though the mulch gets sterilized, some of the spores sometimes survive.

For more basics, I turned to Steven L. Stephenson, a research professor at the University of Arkansas and an expert on slime molds.
Slime mold forms in various shapes and colors. Watch a slide show of some of the more stunning species.

A slime mold, he explained, is a “fungus-like organism” that feeds on bacteria in decaying plant material. There are more than 900 species of slime molds, they are found on every continent, and they thrive in moist, shady places.

“A compost pile represents one of the best possible places to find them, and it is unlikely that one could find a compost pile without slime molds present,” he wrote in an email.

Slime mold spores germinate in the presence of water and a “suitable setting,” such as a pile of dead, decaying leaves to give rise to a single-celled organism. That organism goes on to divide, ultimately giving rise to a multi-celled mass of protoplasm that can grow and spread, like a sophisticated dance. (See Rebecca Jacobson’s April 2012 story for more on their cycle.)

And, Stephenson stressed, they are completely harmless.

“People who find a slime mold in their yard shouldn’t be concerned at all,” he said. “They should realize that slime molds are some of the more interesting and fascinating organisms found in nature. Since slime molds are microorganisms throughout most of their life cycle, and microorganisms are too small to be observed directly in the field, they literally give us a window into the world of microbial ecology.”

So there it is. I was not haunted by slime mold. I was one of the lucky ones. The slime mold had chosen me. I had a virtual window into microbial biology dwelling in my very own front yard. And that’s where it would remain until I returned home to destroy it, mercilessly.

Back at Merrifield, the advice was simple and strict. Using a pitchfork, they instructed me, gingerly move it to a plastic bag and toss it. Disturb it as little as possible. And do not, they stressed, under any circumstances, spray it with water. That spreads the spores.

What you can read next

How & When: Bulbs To Plant in Fall

Brown patch fungus: Do you have weird spots in your lawn?

How to Properly Mow Your Lawn